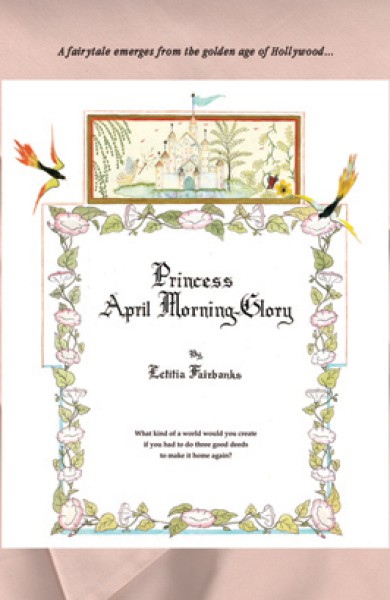 At long last, Princess April Morning-Glory emerges as a lost treasure from the golden age of Hollywood.

Written and illustrated in 1941 by Letitia Fairbanks, the niece of silent film stars Douglas Fairbanks Sr. and Mary Pickford, the seemingly traditional children’s book is transformed into a modern-day fairy tale that will captivate child and adult readers alike.
Letitia was inspired to create portraiture for the characters of Princess April Morning-Glory from film stars of the day. John Barrymore, and Letitia’s cousin Douglas Fairbanks Jr., provided glamorous inspiration through their then-current films. The Wicked King’s (Barrymore) costume was sparked by his role as Louis XV in Irving Thalberg’s 1938 Marie Antoinette, while the hairstyle resembles his eponymous role in Archie Mayo’s 1931 Svengali. Prince Chivalry was inspired by her cousin’s (Fairbanks) sword-fighting role in David O. Selznick’s 1937 The Prisoner of Zenda.
Viewed as unconventional when it first debuted – up until then, no one had thought to meld a Disney-like moral tale with a swashbuckling adventure – the story centers on the prescient acknowledgment that we create our destinies by the choices that we make.
The main narrative is focused around the brave and courageous Princess April who must first transcend darkness and evil before she can realize her true potential. Intrigued by the Great World and its sense of adventure, a young Princess April decides to abandon the familiarity of her home in Fairyland and undertake a voyage into the unknown. Once outside the Enchanted Forest, she finds comfort and friendship in the company of various creatures who ensure her safe passage.
But returning home proves more difficult than at first she realized. In order to go back to Fairyland, a friendly wizard informs Princess April that she must first accomplish three good deeds. Can Princess April resist the temptation of darker forces and summon enough courage to continue doing good deeds? And if she dares to hold true to herself, will it someday lead her back home again?
~ Pump Up Your Book BT

Holding firm to her artistic identify, Letitia gravitated toward portraiture, landscapes, and still-lifes. She was also a biographer, co-authoring Douglas Fairbanks: The Fourth Musketeer, with Ralph Hancock. Her marriage to Hal Smoot in 1966 marked the beginning of a particularly joyful and creative period. Needle points and annual Christmas cards, which featured a painting from the previous year, not to mention her role as a wife, mother, step-mother and grandmother brought her much fulfillment. After a life rich in artistic accomplishment, Letitia passed away in September of 1992.

Kelley Smoot Garrett was born in Dallas, raised in Manhattan and has lived the life of a West Texas wildcatter as well that of an IT professional. At one time or another in her life she’s called places as diverse as Scourie, Scotland; Austin, Abilene and Midland, Texas; Singapore; Paris; and Auckland, New Zealand — home. She is proud to be the daughter of Sue Ashby and Harold Smoot and the step-daughter of Letitia Fairbanks Smoot. She currently lives with her husband Danny Garrett, three cats, and one happy only-dog, Moxie in the Texas Hill Country.