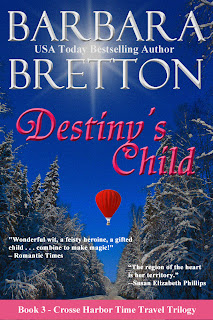 It’s not every day a woman goes traveling through time. Dakota Wylie is a wisecracking, unemployed, overweight psychic librarian from Princeton. Patrick Devane is an angry, hard-headed spy with a six-year-old daughter who hears voices. The only thing they have in common is New Jersey. But when Dakota leaps from the basket of a hot air balloon to help his crying child, little does she know that she’s leaping into history . . . and love.
~ Destiny’s Child

Timeless Lovers . . .Different Worlds
Shannon Whitney didn’t believe she had a future until Andrew McVie crash-lands his time-traveling hot-air balloon in her backyard one summer afternoon and changes her life forever. He is a Revolutionary War patriot. She is an independent modern woman. Their paths should never have crossed but apparently fate has other plans.
~ Tomorrow and Always

Historian Emilie Crosse dreamed of a love that would last forever. Who knew she’d have to sail across two centuries to find it? When her ex-husband Zane Grey Rutledge showed up at her door with a Revolutionary War uniform that was part of his grandmother’s estate, neither one suspected that their lives were about to change in ways they couldn’t possibly imagine. Swept back in time to 1776 where a nation is struggling to be born, Emilie finds herself torn between two men: Zane, her ex who still holds the key to her heart, and Andrew McVie, the Patriot hero of her long-ago dreams…
~ Somewhere in Time

Writers can be an eccentric bunch and I’m no exception. Athletes are known to be wildly superstitious but I’m convinced writers have them beat. We’ll go to great lengths to preserve rituals that have helped us get the words on the screen, no matter how silly they might seem to the rest of the world. (Meaning, of course, our families think we’re nuts!)
I’ll admit to having done everything from charging fairy stones on a sunny window to placing amethyst crystals atop my computer monitor to playing exactly twelve games (no more, no less) of Yahtzee before typing a single word.
It’s okay if you laugh. I’d probably laugh too if I hadn’t been doing all of the above for longer than I care to admit.
Superstitious? Not me. I like to call it “conditioning my environment,” and that conditioning extends toward the music and movies and food I enjoy when I’m deep into the throes of a new manuscript.
Here are some of the movies I used to put me in the Revolutionary War mood while writing my Crosse Harbor Time Travel trilogy.

1776 – both the movie and the soundtrack. I’ve seen it in the movies, enjoyed it on stage, and admit to watching the DVD so many times I can repeat the dialogue verbatim. If you’re looking for wonderful acting, great singing, gorgeous costumes, love and romance and the sweeping passion of history, this is the movie for you.
Sweet Liberty – I’m not ordinarily an Alan Alda fan but this movie captured my imagination years ago and held it. Alda plays a history professor whose book about the American Revolution becomes a surprise best-seller. When a movie crew comes to town to film his novel, he falls in love with his own heroine while his fiancee falls in love with his hero.
Drums Along the Mohawk – a gritty, heartbreaking look at the Revolutionary War and its effect on families in New York’s Mohawk Valley. I will never forget Edna Mae Oliver’s character and the courage she displayed under devastating circumstances. This isn’t an easy movie to watch. It doesn’t pull its punches when it comes to Indian raids or Tory attacks. Love, tragedy, and triumph in one unforgettable package.
Johnny Tremain – a 1957 Disney live-action feature that is surprisingly good. I’m instantly drawn into the world of the thirteen colonies as we follow the young Boston silversmith as he copes with war and life.
John Adams – no list would be complete without this masterpiece of storytelling and acting. It’s probably the most historically accurate of the movies I’ve listed and definitely the most emotionally moving . . . and disturbing. I can’t think of another film or book or television show that captured the devastating loneliness of wartime as well as this HBO miniseries did. It also brings home in vivid clarity what it’s like to fight a war literally on your own doorstep.

Writers might be quirky but we know good movies when we see them!

Excerpt from SOMEWHERE IN TIME

Somewhere in Time is currently free for download from iTunes, Amazon, Smashwords. It can be downloaded in all formats from this Smashwords link.

About the Author & Links:

Barbara Bretton is the USA Today bestselling, award-winning author of more than 40 books. She currently has over ten million copies in print around the world. Her works have been translated into twelve languages in over twenty countries.

Barbara has been featured in articles in The New York Times, USA Today, Wall Street Journal, Romantic Times, Cleveland Plain Dealer, Herald News, Home News, Somerset Gazette, among others, and has been interviewed by Independent Network News Television, appeared on the Susan Stamberg Show on NPR, and been featured in an interview with Charles Osgood of WCBS, among others.

Her awards include both Reviewer’s Choice and Career Achievement Awards from Romantic Times; Gold and Silver certificates from Affaire de Coeur; the RWA Region 1 Golden Leaf; and several sales awards from Bookrak. Ms. Bretton was included in a recent edition of Contemporary Authors.

Barbara loves to spend as much time as possible in Maine with her husband, walking the rocky beaches and dreaming up plots for upcoming books.